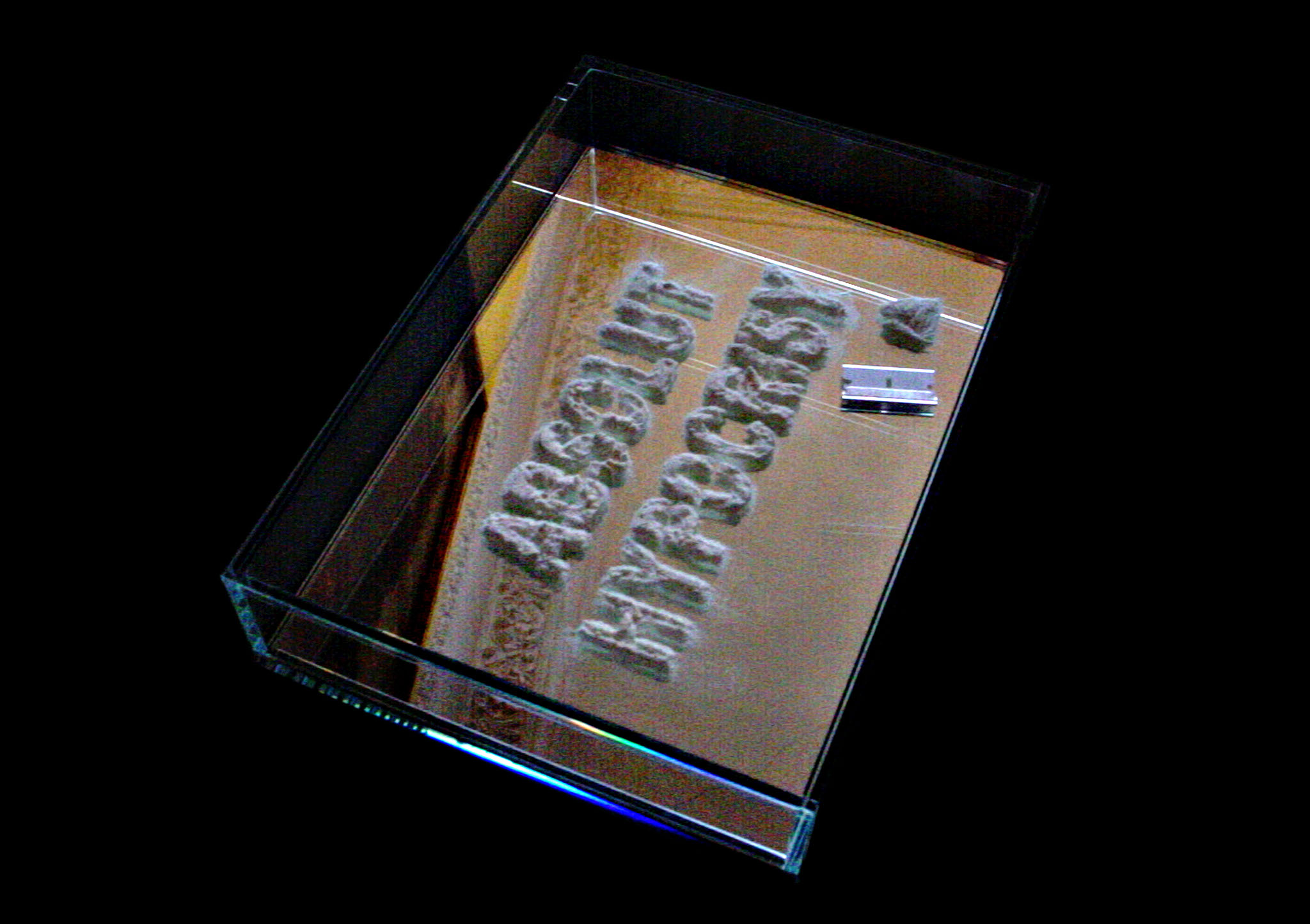 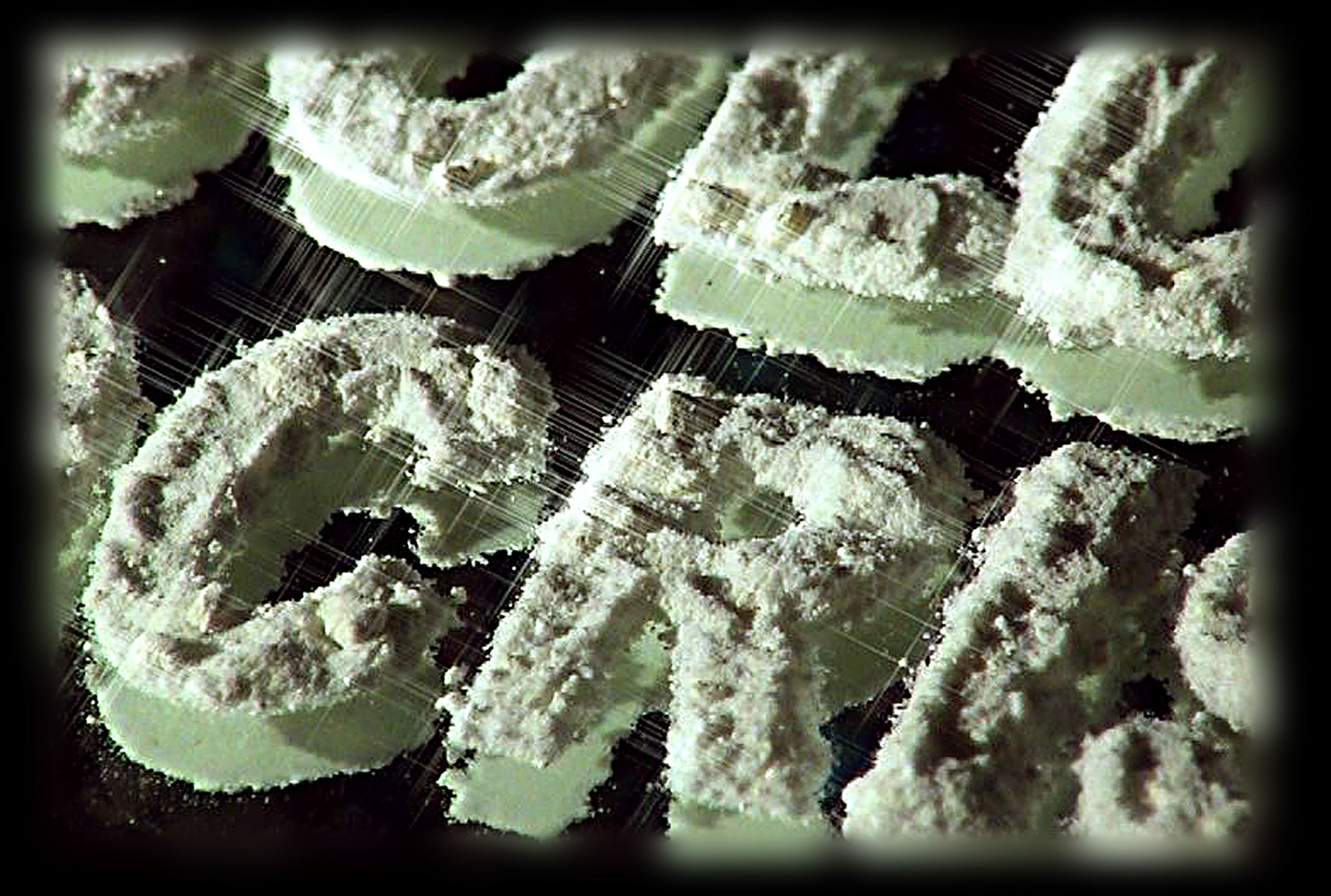 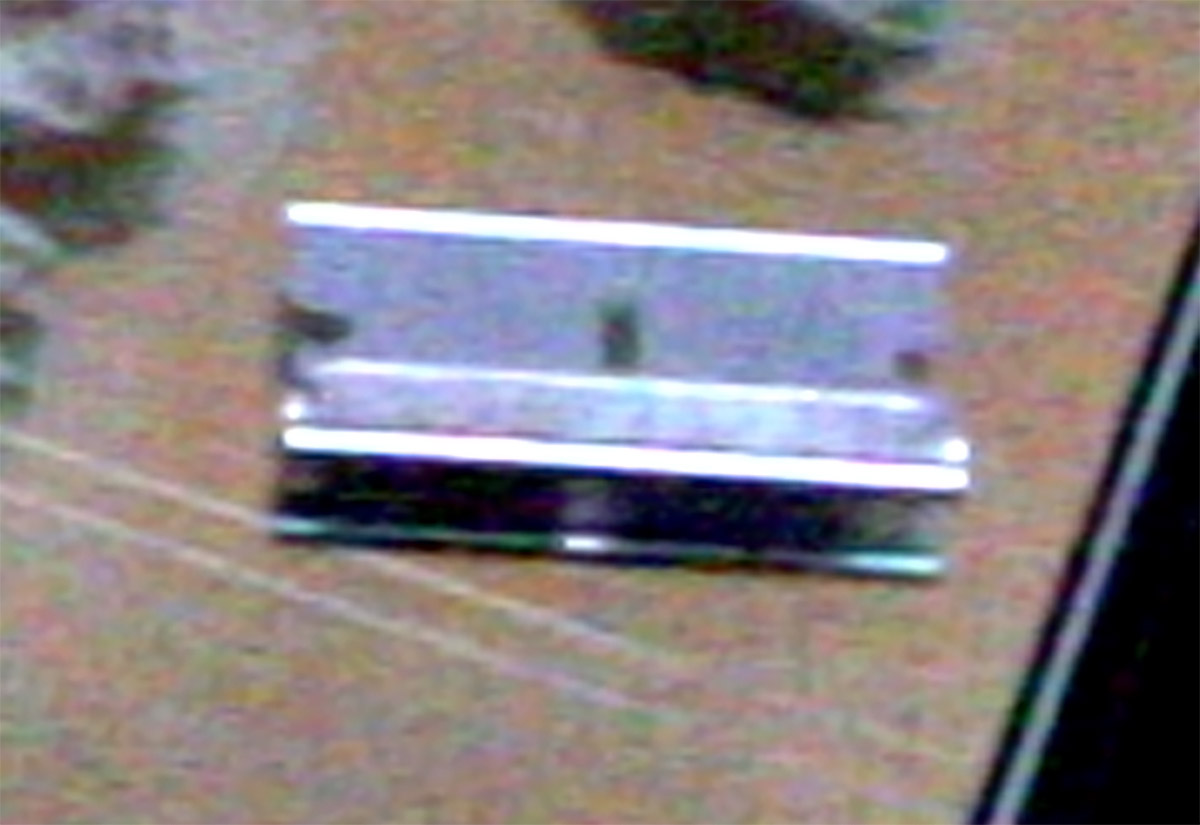 Tyszko’s theme of cultural politicization is given acute emphasis with the work Absolut Hypocrisy, a piece which invokes a number of extremely potent and conflicting value systems. The work comprises a kit and instructions, the owner of the artwork using a stencil and creating the work according to the artist’s instructions. A quantity of real cocaine is placed within a mirrored vitrine, first having been passed through a stencil so as to spell the words ‘Absolut Hypocrisy.’ This makes reference to a vodka brand called Absolut, which has marketed itself by making knowing puns on the word absolut(e) in its advertisements, invoking the artworld and individual artists, as well as by sponsoring art events.

Using the medium of cocaine, Tyszko offers up his own, past experience, of a (now ended) twenty years of illegal drug use, to this brazenly commercial, legal model. In this way the artist puts his personal experience and art to the service of a militant challenging, exploring the corporate ‘dealing’ of a glamorously sanctioned, alcoholic psychotropia.

Illuminated with a spot, the twelve grams of highly illegal cocaine in Absolut Hypocrisy glisten and gleam in their prestigious vitrine, with ambiguous aura. The cocaine in the work has a black market value about £1000, further increased by its commodification into an artwork – confirmed in market terms by having been sold, at an exponential mark up, to a collector.

Tyszko says, ‘In making this work I have attempted to look at a number of value systems – political, artistic, personal and financial – and at the complex interrelationships between them.’ With Absolut Hypocrisy further and changed value systems are given to what is a simple, plant based substance, whose final co-opting by the artist within the contemporary art world further fetishises the drug, its value so increasing by a staggering factor.

‘Since prohibition,’ Tyszko continues, ‘a new paradigm has come into being, one that effectively deifies the product and creates a value greater than its actual worth. The greater the distance it travels, the greater the value becomes, as more and more people interact within this externally imposed value system.’ Absolut Hypocrisy might, in some senses, be called a drug deal, the artist exploring, in a staggering provocation, notions of personal identity through consumption.

Everyone involved including the collector of this work will be participants in a very real performance, one in which they will effectively become criminalised through the vulgar contingencies of a  fundamentally moralist  prohibition. Yet as participants in 'High' Culture they will undoubtedly escape the harsher penalties that the less advantage might endure.....

A Visit to the Bolivian Ambassador

After the success, both conceptually, artistically and financially, it was decided that the project should both reach a wider audience and scaled up to better reflect the global nature of the issues raised.

This led to a meeting with Gonzalo Montenegro, the then Bolivian Ambassador in London, where Tyszko proposed making a vast American Flag From several million Dollars worth of confiscated cocaine in Bolivia and then setting fire to the piece, in a potentially classic piece of Agitation/Propaganda. Senior Montenegro grapsped the implications of the piece immediately, and when he finally stopped laughing (with Tyszko, not at), plans were made to investigate the reality of making such an audacious piece.

Meetings were also held with Zuelieva Vivas the Venezuelan cultural attache who once again was extremely interested in helping to produce this 'revolutionary' artwork.

Yet Ten years later the piece has still not been made, the fact that at some point we would be destroying several million dollars worth of someone's cocaine, and the simple reality of life, prohibition, and politics means we may never get to complete the work, yet........ we try.

This is a work consisting of a sheet of mirror glass upon which the phrase 'absoute hypocrisy' should be spelt out using the steel stencil provided, and consisting of aproximatly 12-14 grams of a white crystaline powder with the